SOLITU  Part R:  A Religious Interpretation of the Solution

Why faith in God is not changed:

The important difference between description and explanation:

HOWEVER, I wish to point out to everyone that science usually confuses explanation with description.  That is, science can be viewed as a description of what occurs and how it occurs.  This could be called "descriptive science."  And, science can be viewed as an explanation of why something occurs.  This could be called "explanatory science."  But in our language the difference between "description" and "explanation" is subtle.  It is logical, though a challenge in terms of philosophy and linguistics, to say that a description is a statement of how something happens, a sequence of events.  But something new is added when we ask "Why?"  If we ask why do molecules assemble themselves, no science that I know of answers that question.  I most explicitly DO NOT propose that the Unification Construction, or the Holy Trinity Construction, is explanatory.  It DOES NOT tell me WHY molecules assemble themselves.  There is still the unanswered question as to why there is something instead of nothing, why matter exists in the first place.  Therefore, I disagree with anyone who says that Evolutionary Proportion is atheistic or is a proposition that serves the purpose of replacing God or religion with a scientific theory.  For me, all that can be said about Evolutionary Proportion in terms of religon, if it is demonstrated and upheld by further study, is that it appears to be God's plan.  To me, there is no religious prohibition against learning about how God works.  On the contrary, as a young child I was taught (at a strict Christian school) that I am here to know God, to love God and to serve God.  I have always believed that the option to not love God is beyond ridiculous.  If God created the universe it seems absolutely absurd to have any feelings other than pure and permanent respect.  Add trust to respect and you get love.  And how do we learn to trust God?  By repeatedly searching for and finding the reliability of the Laws of Nature.  We are called to understand the creation, however it was created.  To understand and to care is what we are made for.  Most scientists have faith, often much greater and deeper than the faith of those who make a lot of noise about their religion and how much they love God.  A person who respects God studies his art.  There is no religious prohibition against knowledge.  To know God I must study his art.  That is a path available to all who seek to know God.  I would argue that neither description nor explanation diminish wonder.  With greater understanding, wonder is added.  The universe is awesome and our understanding of it is another awesome thing that occurs naturally in the midst of its awesomeness.  Knowledge is a turtle that swims through space.

The Ancient Goddess Nut Icon for Proportion in the Cosmos 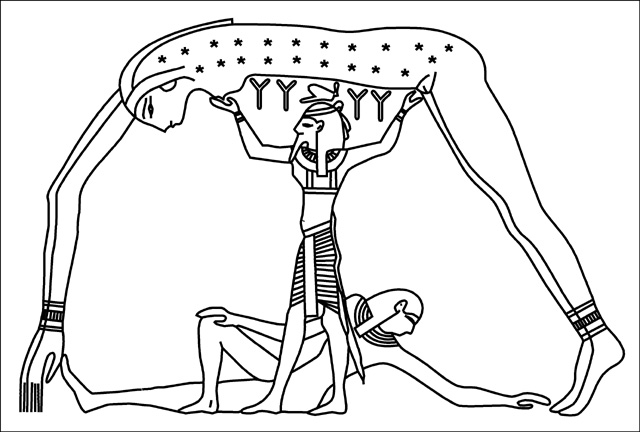 Was there an ancient meme icon for the Holy Trinity as the Creator of Life?

(Journey List) or (Welcome) page links or (Mindstream) of J. Manimas or (JM Magazine 2015) or (Geometry List) or back to (SOLITU Contents).